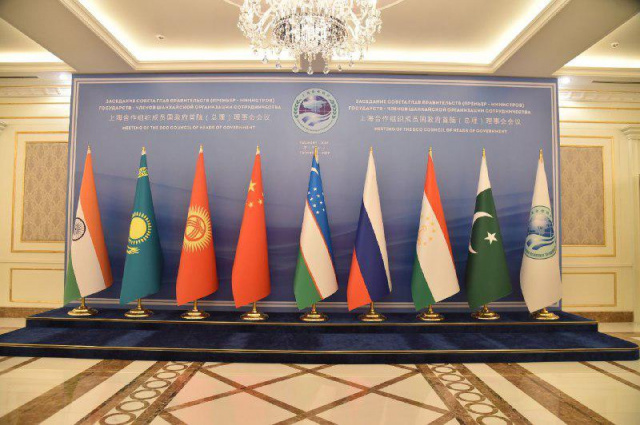 On November 2, Tashkent hosted the eighteenth meeting of the SCO Council of Heads of Government.

Development of the SCO's activities was emphasized during the negotiations, the important legal basis of which is the Charter of the organization and the Long-term Treaty on Good-Neighborliness, Friendship and Cooperation signed between the member states.

Participants of the Council of Heads of Government approved the agenda and the list of documents envisaged for signing within its framework, discussed current issues of the SCO activity.

The extended meeting of the council was attended by the Chairman of the SCO Business Council Marat Sharshekeev and the Chairman of the Council of the SCO Interbank Association Azizbek Omorkulov, representatives of observer countries – the Chief Executive of the Islamic Republic of Afghanistan Abdullah Abdullah, the Prime Minister of the Republic of Belarus Sergei Roumas, the First Vice President of the Islamic Republic of Iran Eshaq Jahangiri, Deputy Prime Minister of Mongolia Ölziisaikhany Enkhtüvshin, Deputy Chairman of the Cabinet of Ministers, Minister of Foreign Affairs of Turkmenistan Rashid Meredov, as well as representatives of international partner organizations – Officer-in-Charge of the United Nations Economic and Social Commission for Asia and the Pacific (ESCAP) Hongjoo Hahm, Deputy Chairman of the CIS Executive Committee Sergey Ivanov, Deputy Secretary-General of ASEAN for Community and Corporate Affairs Robert Matheus Michael Tene, Executive Director of the Conference on Interaction and Confidence Building Measures in Asia Habibullo Mirzozoda, Chairman of the Board of the Eurasian Economic Commission Tigran Sargsyan, FAO Assistant Director-General and Regional Representative for Europe and Central Asia Vladimir Rakhmanin.

Participants of the meeting heard the information from the SCO Secretary-General V. Norov about the tasks set by the heads of the organization's member countries to the governments at Bishkek summit, namely on further development and strengthening comprehensive cooperation in security, politics, economics, as well as the chairmen of the Business Council and the Council of SCO Interbank Association on the activities of the structure.

The need was noted for strengthening joint actions to form an open international economy.

Memorandum of Understanding signed between the SCO Secretariat and FAO once again confirmed that the organization's activities are based on the multifaceted cooperation in politics, security, economics and humanitarian relations.

Particular attention was paid to the importance of deepening multilateral ties between the governments of the SCO member states in providing qualitative services to the population in remote and rural regions.

In this regard, the development of the Concept of Cooperation of the SCO Member States on Development of Remote and Rural Areas in the Digital Age and the Approval of the Action Plan for its implementation, within the framework of the meeting of the Council of Heads of Government, have gained particular importance.

An agreement was reached on further development of cooperation in culture, education, sports, science and technology. In order to promote the rich historical and cultural heritage of the SCO countries, it was proposed to develop ties to more fully reveal the tourism potential of the region with the wide use of capabilities of "Ipak Yuli" International University of Tourism in Samarkand.

Taking into account the environmental situation in the Aral Sea region, an idea was forwarded to support the initiative of Uzbekistan for organizing "Aral Sea Area – Zone of Environmental Innovations and Technologies".

This will help strengthen good-neighborliness, friendship and cooperation between the peoples living in the SCO area, enhance intercultural dialogue in the name of their interests.

Heads of Government considered the implementation of the SCO's Multilateral Trade and Economic Cooperation Program, approved the new program and the organization's budget for 2020.

14 documents were signed at the event. A Joint Communiqué was signed following the eighteenth meeting of the SCO Council of Heads of Government.

At the meeting with media representatives, it was noted that the meeting was effective, the signed documents will contribute to further development of practical cooperation between the SCO member states.

The next meeting of the SCO Council of Heads of Government in 2020 will be held for the first time in the Republic of India.